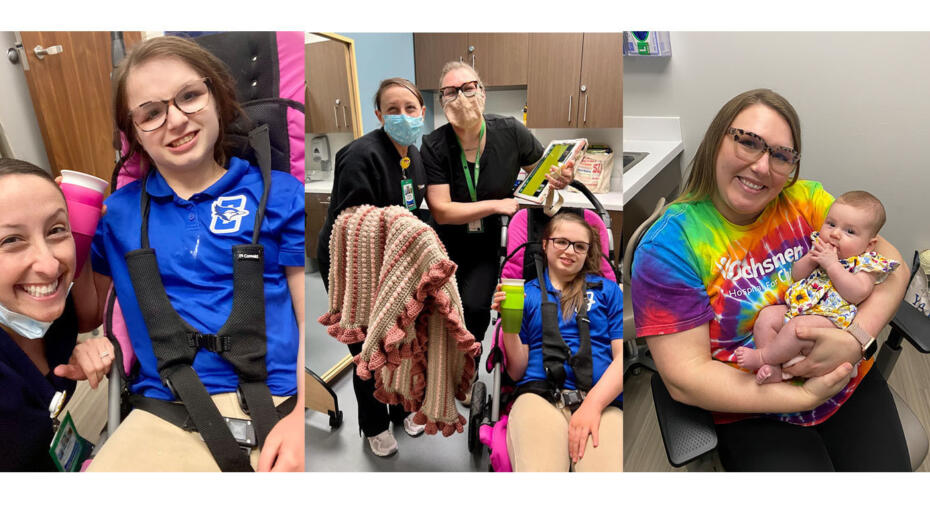 Ochsner Employees Help One Another

People come into our lives for a reason; sometimes by luck, sometimes intentionally. It was a little bit of both for Ochsner employees Christie Jewell and Heather Gunter. Christie, a speech therapist, and Heather, a lactation specialist, never knew their paths would cross, but little did they know what a blessing they would be to each other.

Christie and Heather are both relatively new to Ochsner; Heather began work at Ochsner in 2019 while Christie joined Ochsner in 2020. Heather was wrapping up clinicals as a student nurse midwife in 2019 when the lactation specialist position came open, and you could say the rest is history as she is now a member of the infant feeding team. Christie joined Ochsner near the end of 2020 after practicing as a speech therapist in the Baton Rouge region for the eight years prior; she learned about the opportunity at Ochsner through a mentor of hers, Courtney Gonsoulin.

The two initially met when Christie began working with Heather’s daughter, Jaelyn, who is nonverbal and uses a communication device. It happened by chance as Jaelyn’s initial provider had to step out for maternity leave and that’s where Christie stepped in during the spring of 2021.

“The speech therapist that Jaelyn was working with prior worked mostly with infants,” Heather said. “Christie had a good bit of experience with older kids that are nonverbal and have communication devices; she was just what Jaelyn needed.

“Jaelyn can be a little feisty at times so it took some time for them to mesh. Christie is so sweet and happy-go-lucky. Jaelyn was a little hesitant at first to allow Christie in, but now she absolutely adores Christie.”

Jaelyn and Christie hit the ground running and developed a bond after their first few sessions. Heather jokingly says that Jaelyn is more likely to take selfies with Christie than herself. It shows the comfort level that Jaelyn has developed with Christie during their time together.

“Jaelyn is too cool to take selfies with me but she’ll happily take some selfies with Christie,” Heather says laughingly. “That’s impressive. Jaelyn is quite particular about her people.”

“With any patient, you have to establish rapport and trust, especially if you’re going to work in the field of communication,” Christie notes. “My goal for all my pediatric patients is for them to have fun at their sessions.

“Once I got to know Jaelyn’s preferences, our friendship was established. Watching Jaelyn’s communication growth during our time together has been amazing. She always has a lot to say and just needs assistance navigating an alternative means to do so.”

Another unique aspect of the relationship among Heather, Christie and Jaelyn is the fact that Heather can attend every session that Jaelyn has on Tuesday afternoons. Both Christie and Heather work at Ochsner Medical Center – The Grove and that allows Heather to hop right up to the fifth floor where Ochsner’s one-stop pediatric super clinic is located.

“My Tuesdays are pretty busy,” Heather says. “I schedule half days on Tuesdays. I work and do infant feeding in the morning before heading up to the fifth floor for Jaelyn’s afternoon appointments.”

Christie became pregnant with her first child in the summer of 2021. Motherhood is a rewarding and motivating process that presents so many memories. It’s also a challenge, especially for a first-time mother.

“I know with the first baby you have no idea what to expect,” Heather notes based on her experience. “You are in this whole new world and everything postpartum is a blur. It can be intimidating at times.”

Luckily for Christie, she had a great support system set up for herself and her baby, Camille, who was born on April 2, 2022. Things were going well but some trouble did arise in Christie’s breastfeeding journey with Camille.

“It was very comforting knowing that I had a friend, who just happened to be an expert in infant feeding, on my side,” Christie says. “Heather told me throughout the whole process that if I ever needed anything, to le let her know. I was hesitant in the weeks leading up to birth as to what I might need, but I knew once I started breastfeeding that something was a bit off. That’s when I knew I needed some assistance and reached out to Heather.”

A few days later an appointment was scheduled, and Heather was in an appointment room with Christie and Camille for a two-hour initial consult. It was an in-depth process where a number of things were discussed, but by the end of the appointment things were starting to click for Christie.

“Heather was an integral part of the breastfeeding journey and the early stages of motherhood for me,” Christie remembers. “I’m forever indebted to her just because she made the early parts of motherhood so much more rewarding for me. She guided me through breastfeeding and wasn’t just a lactation specialist, but she became a friend; somebody I could count on when I needed advice.”

Bonds have been built and these two families will be connected for life. They have invested ample amounts of time into each other’s lives, and it doesn’t look like that will stop anytime soon.

“I am officially Aunt Heather to Camille, and Jaelyn calls her Aunt Christie,” Heather notes. “We are best friends. I talk to Christie more than almost anyone in my life. We are constantly texting and talking about all things life. We are so grateful for one another and that we are in each other’s lives.”

The crux of this whole story is that Ochsner is here to serve our patients and community. It just so happens that these two women specialize in areas that were of help to each other. And we shall not forget that these two women help countless other Ochsner patients through their breastfeeding and speech therapy journeys.

“Communicating and feeding are the most basic wants and needs for kids,” Christie says. “Being able to have the support for those areas at Ochsner for our children with someone you can trust makes you feel at ease.

“I’ll show videos of Camille to Jaelyn during a therapy session, and she will let me know with her communication device that she wants to see more. The whole dynamic has become a really special bond.”

A heartwarming story of coworkers becoming best friends while helping one another in healthcare.

Below are links to family birthing and speech pathology services.