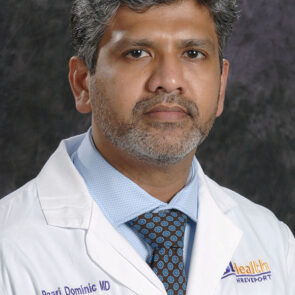 Dr. Dominic graduated from Stanley Medical College in India. He trained as an Internal Medicine resident and served as Chief Medical Resident at Chicago Medical School. He did his Cardiology Fellowship at the University of Iowa and was a post-doctoral fellow under Dr. Mark Anderson and published highly cited scientific papers on the role of Calcium Calmodulin Kinase II in cardiac diseases. He specialized in Cardiac electrophysiology at Yale New Haven hospital.

As the Cardiac Arrhythmia and Heart failure service line director, he also oversees the treatment of patients with advanced heart failure. He is the assistant director (Clinical and Translational Research) of the Center for Cardiovascular Diseases and Sciences, a LSU Board of Regents approved Center of excellence. He is a co-director of the LSUHSC Shreveport site for LA CaTS, a federally funded IDeA-CTR. His research focuses on understanding the role of gaso-transmitters mediated oxidative stress in the causation of arrhythmias and on elucidating the molecular mechanisms behind methamphetamine induced oxidative stress mediated sudden cardiac death. Clinically, he is interested in studying the risk factors for AF, specifically cancer and cancer therapy related AF and the outcomes of treatment in AF patients. He has extensively published in high impact medical journals and presented his work in national and international meetings.

6 Tips for Living with Atrial Fibrillation

Life with Atrail Fibrillation (AFib) has its challenges and can impact your relationships, stamina and emotional health. By making a few simple lifestyle changes, you can help protect your heart and better manage your condition.
By Paari Dominic, MD